Why a Flamingo Stands on One Leg 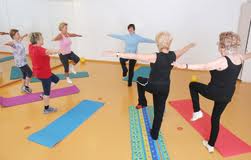 You’ve all probably heard the old joke about why a flamingo stands on one leg…and we have all seen these lanky birds if we’ve ever been to a zoo.  The answer is simply, “If they lifted the other leg they’d fall down.”  Now, why would a person stand on one leg…and do so for 10+ seconds?  According to recent research, it is to test their health and expectation for longevity.  You’ve seen or heard it in the news that people in their mid- to late-life who cannot maintain this one-legged posture have more than twice the risk of death in the next seven years over those who can do the pose.  That’s a very big differential.

To fill in the rest of the research that may not have come across on your evening news or in your online news feed, medical researchers have noted for a long time that agility like this is tied to risk for cognitive decline or other cerebrovascular damage.  About 13 years ago, researchers took this a bit farther with a panel of 1,702 patients who would be followed from 2009 forward.  Their average age at the outset was 61.7 and 68% of them were men.  Over one in five failed the test from the get-go, and as you can imagine, the failure rate was higher among older participants.  More than half of the 71 to 75 year-olds could not pass the test.

These individuals were followed for a median of just over 7 years and 7.2 percent had died by this next measurement date.  But mortality was not equal across the board.  Just under 5% of those who could do the one-legged stand in 2009 had died seven years later, but more than 17% of those who could not balance earlier had died.  Scratching beneath the surface, there were more factors than simply balancing in play.  The researchers found that people who could not balance also:

The study cannot say that there is causation between these factors and death, but these are differences worth paying some attention.  So, getting more agile is probably a healthy thing to do, but there likely is more.  Getting to a lower weight, managing physical activity to burn calories, taking medications to reduce cholesterol and managing other lifestyle factors to bring one’s long term blood glucose levels down are all pretty sound pieces of advice.  Chances are that if a person follows these lifestyle management recommendations that it also may become easier to balance on one leg.  The payoff for all of these, then, is pretty obvious.  And I think we could add one more.  The chance of a fall will be greatly reduced if one gets their nimble back as well, so where will you stand on this issue?