Dementia from a Pet’s Point of View 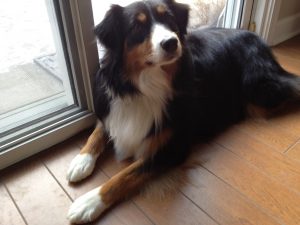 So, I’ve given away that I’m a dog owner rather than a cat or other pet, but the commands here underscore findings from research reported at a recent meeting of the American Academy of Neurology.  In short, the researchers from the University of Michigan reported that pet owners preserved their cognition better than non-pet owners in a six year study that followed 1,369 people who started with an average age of 65.

Cognitive decline was slower for older adults who had pets.  It has long been observed that pet ownership (some say that this is the other way around) is associated with lower rates of depression.  The researchers here decided to delve into a potential relationship between pet ownership and cognitive decline in a large scale University of Michigan study called the Health and Retirement Study (HRS).  Of the 1,369 people in this study, 53% owned pets and a majority of these were long term pet owners.  People whose cognition was impaired at the outset of the study were excluded from the research.

As the researchers followed both pet owners and non-owners, they found a statistically-significant advantage in the cognition measured among the owners.  They also found that longer term owners had the edge over everyone else in cognitive retention.  Those study subjects who were Black or college-educated or male had a more pronounced positive effect on cognition.  While the researchers go on to say that this is not a cause and effect study, the findings favoring pet owners were statistically meaningful.

Although the researchers stop short of advising all older adults to rush out and purchase a furry companion, they do point to additional positive effects of pet ownership.  Other studies have demonstrated that pet ownership can mitigate loneliness and depressions.  Still other research among military veterans not only improved the mental health of those with PTSD and worked to lessen depression as well.

I would also add that the study found this positive effect on participants who were responsible for the care and maintenance of their pets.  That is, just having a therapy animal show up regularly will not have the same cognitive benefit as hands on pet care and maintenance.  Part of pet maintenance are the two or more daily walks for the pet and the owner if this is a dog.  Let’s face it: the walks are good for more than cognition if both the furry friend and the owner put in the steps every day.

Back to not using this study as a platform for advocating pet ownership.  The authors did recommend that the data were sufficiently strong that they could strongly encourage that older adults with pets be supported in keeping their pets.  Taking a pet from an older adult who may require alternative housing arrangements should not be considered without also considering how the pet and owner can be supported together.

When the IRS Calls…
It All Begins with a Mouse